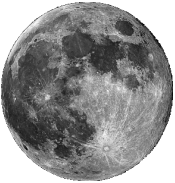 Eleven of the first 30 Lodges in Washington were Full Moon Lodges. Today Mount Moriah Lodge is the only one left maintaining that tradition.

Masonry was active in the state before the appearance of the modern lighting. Gatherings at night were lighted by numerous candles or by smoky oil lamps of various types. Our early Masonic brethren indeed had miserable lighting in their Lodge rooms, judged by present standards.

It was also difficult for Masons to find their way to their meeting places over dark streets that were generally rough and rugged. The only lighting at night was that provided by the light of the moon.

Therefore all over the nation many Lodges held their meetings by the light of the full moon. The practice was so practical and prevalent that the Grand Lodge of Iowa in the 1840s began circulation among its Lodges of a Full Moon Almanac, disclosing the regular appearance of the full moon for a number of years in the future. This almanac was copied by other Grand Lodges.

BY THE LIGHT OF THE FULL MOON by VW Bro. Paul W. Harvey, Grand Historian Emeri­tus