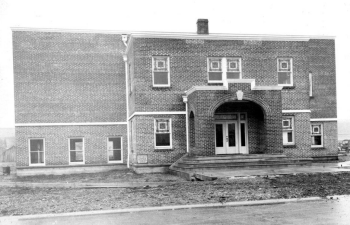 Shelton Lodge 1926
The last epoch of the three in the One Hundred years of the Lodge's life began on June 24, 1920. It was about this time that little signs began to show in the minutes that crowded conditions made it mandatory that a new home was fast becom- ing a "must."

Past Master Chas. Runacres was a bit bolder than the others and moved that a committee be appointed to locate a suitable site for a new Masonic Temple. The spirit of progress was really being born. No longer would the meeting place be known as a hail, the thinking was on a broader scale and we find them dealing in terms of a Temple after the manner of the ancients. To start this new movement W. Bro. Ransom appointed P.M.'s W. M. Beach, E. Frank Brown, and Chas. E. Runacres.

The committee was instructed to find a suitable site and they did exactly that. On July 24, only a month from time zero they had the northwest corner of 3rd and Cota. They were asking the lodge if this site would be acceptable for the consideration of one dollar. Bro. Fieser's moved was acceptance and the motion carried.

W. Bro. Ward reported for the committee on December 10, 1921, that the committee would introduce a resolution amending the section of the By-Laws regarding fees and dues. The amendment proposed raising the annual dues to $10.00 and the initiation fee to $100.00, $65.00 of which would be placed in a sinking fund to retire the building bonds.

Bro. W. G. Rex of the Building Committee gave notice to the lodge on December 30, 1922 that at the next stated communication the committee would ask permission of the lodge to commercialize the new temple. A motion to the above effect was made and carried at the meeting of January 27, 1923.

Rapid progress was made on the construction and laying of the cornerstone was scheduled for July 11, 1925, with construction finished and the Temple dedicated in 1926.

The mortgage for $5,000.00 to the Mason County Savings and Loan Association was paid in full on June 26, 1931. Indebted- ness remaining in the form of bonds was retired piecemeal as the money became available from the portion of the annual dues of each member. The last bonds were called on 1955.