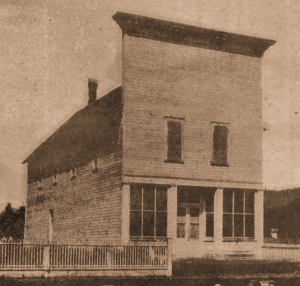 Shelton Lodge 1888-1926
Thomas Bordeaux, J. A. Heugheus and M. P. Hilton were appointed February 5, 1887 to procure suitable lots in Shelton for a building. They reported on March 3, that two lots had been purchased from David Shelton for $100.00. These were lots 7 and 8, BIk. 16 of Francis Shelton's addition to the town of Shelton.

At the same meeting Bros. D. Morrison, M. P. Hilton and Thos. Bordeaux were appointed to get an estimate of the cost of a two story building 24 x 60 feet and March 19 was set as the meeting date for discussion of matters pertaining to building the new hail. After hearing the committee report, an estimated cost of $1000.00, the same committee was delegated to procede with building of the Hall. The same committee was also given the task of disposing of the old haIl. The lodge also declined a gift tendered by the citizens of Shelton to the lodge for the building fund and a vote of thanks was sent for this friendly and generous offer.

On June 11, 1887 Brother Thomas Bordeaux presented a bill for $10.00 for the cash he paid W. T. Morrow for clearing the new hail lot. Renting of the lower story of the new hall was discussed and the matter placed in the hands of the building committee to act at. their discretion.

Also at the meeting on the above date each of the brothers started paying $10.00 dues plus an additional $10.00 for the building fund.