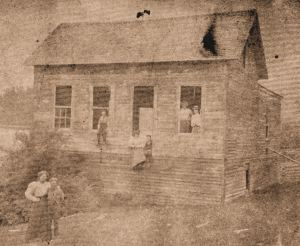 Oakland Lodge 1864-1888
About two miles from Shelton on the Bayshore road are three houses about equally spaced, occupied respectively by Marvin Lund, Dr. Berwyn Thomas and Phil Fredson. The Thomas home is essentially in the middle of the old settlement. Lund's house is near the south end and Fredson's is on the north end. The old Morrow-Willey-Fredson home (Original torn down and rebuilt in 1895 - this was razed in the early 1950's) was located about halfway between the Thomas and Lund homes. The old post office was situated almost directly in back of the old house and would be near the present highway. Near the water's edge and slightly to the south of the old house was a store operated by  Swindle. In this building the first meetings of Mt. Moriah No. 11 were held until the lodge hall was built.

The original lodge hall was situated in what is now an alder swamp halfway between the Thomas and Fredson houses. The courthouse - schoolhouse - community center etc. building stood on the slope above the lodge hail above and on what is now the highway.